This document is intended to highlight the updates and enhancements now available in the latest version of Enview Explore™.  Additional information can be found on the Enview website at https://www.enview.com

Explore v2.13 is largely a maintenance release, and does not include many new features.  However it does contain several bug fixes and updates to existing features.

HLZ Suitability Analysis: For select customers, a new helicopter landing zone (HLZ) suitability tool is now available. This tool takes several input layers (slope, soils, obstructions, etc.) and calculates the suitability for a CH-47 or HH-60 helicopter to land in a given analysis extent. Refer to the documentation for more information on this tool. 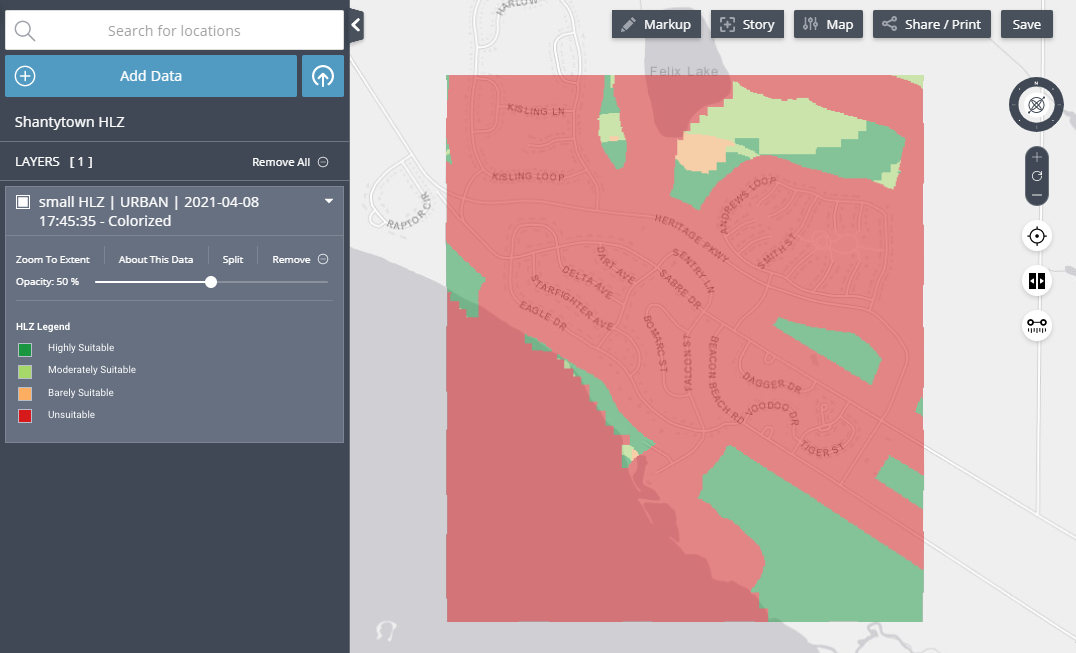 Change to Scene Terminology: Previously the term ‘Scene’ was used in two conflicting ways inside Explore: 1) to define the map project you were working within, and 2) capturing the view extents or slides used to create a story. The term ‘Frames’ will now be used to represent the individual slides that make up a Story, and the term ‘Scene’ will be reserved to represent the map project you are working within.

Incorrect Color in Change Detection: A bad alpha channel inner buffer was causing incorrect colors in the change detection result. A fix was added to prevent this issue from occurring in the future.

Esri Basemaps Not Loading: A bug was identified that prevented basemaps from loading correctly in Explore. This has been addressed, and basemaps should load as expected.

Markup Popups Do Not Work with Imagery Basemap: You can create markups when using the Imagery basemap, however clicking the map to Get Feature Information is not working at this time.

Data Missing in Rural Areas: When using the Street and Topography basemaps, some rural areas are missing data below zoom level 17.

Edited Dataset Name: When a user edits a dataset name, the updated name is not reflected when navigating to the Add Data window on the Map page.

Active Pan Outside of Map Extent: In Google Chrome, the cursor’s pan function will remain active if the mouse cursor is moved past the map extent. Moving the cursor back will continue panning as though it wasn’t released. This is an issue with Google Chrome that cannot be addressed by Enview.

Measure Tool: The Measure tool in the Map view does not work when in 2D map view.

We encourage you to submit feedback and ideas for improvement at ideas.enview.com